Studio Evolver was held in Fall 2015 with the mentorship of Amin Bahrami, Hoomad Talebi, and Mobasher Nekoei as the chief mentors in Caai institute with the supervision of Studio Helioripple (Amin Bahrami & Hoda Farazandeh). It was based on a computational design approach in three sections to help students reach an architectural design approach. First, the studio aimed to ignite alternative computational methods to approach critical architecture design in their minds. Elementary, middle, and final, This general practice is mounted throughout the studio on one or a combination of more specialized areas (self-organization, data-driven design, or agent-based design). The Studio was supposed to be held in two parts: Starting a studio is accompanied by intensive preparation for implementing coding tools such as Grasshopper and Processing. The basic exercises are done in groups and freely and in data, self-organization, and agent subjects. In the middle part, by grouping and choosing one of the specialized topics and starting studies in the field, the idea of designing a skyscraper was conceived. The studio had an interdisciplinary aspect and mentality through meetings on related topics and experts in other disciplines such as biology and sociology. Finally, an attempt was made to study the nature of computer-based design from all perspectives.

In the first section, held in five weeks and ten sessions, all three mentors supervised and directed the studio with the students with the same topic. The second part of the studio diverged into three parts, each supervised by one of the mentors. The sub studios consisted of

At different course stages, the students were screened and guided in the academy of ideas with the benefit of professional architects and professors in this field. Finally, the ideas selected in the Evolo contest would have been tested. One of the studio characteristics is advancing the design and familiarity with inventing a computerized way to deal with an architectural problem in / or out of context. 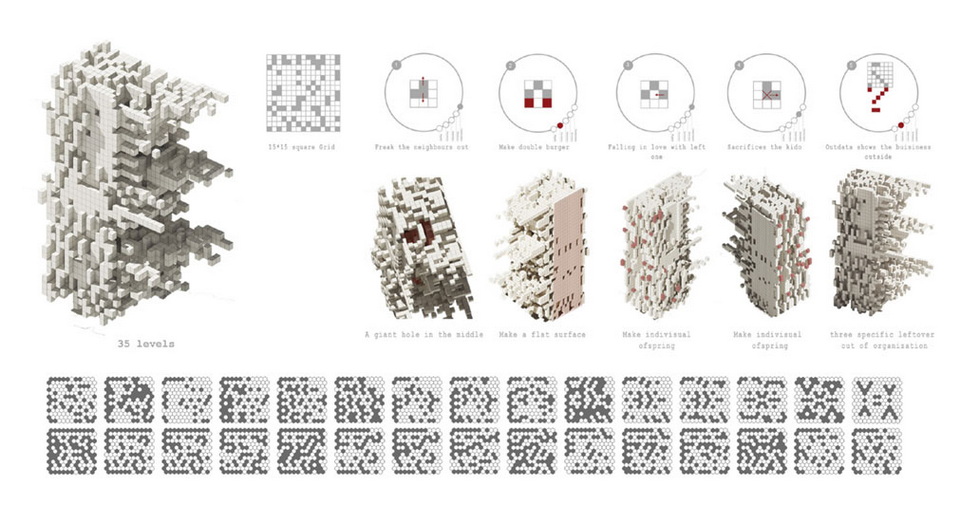 They are practicing rule-based design with the study of “2D Cellular Automata,” such as Conway’s “game of life” in 3*3 square grids. Each team member has a right to design a rule for each cell in a grid, based on its neighborhood. Each level is being extruded and stacked above its previous steps. After doing the first phase of the assignment, as a warm-up, students were supposed to be introduced to static and dynamic data, learning to collect, visualize, map and apply them to the arbitrary grids defined by themselves and extract new rules from their design public and individual environments. In the meantime, participants started to use cloud space such as Google Drive as the first steps of collaborative design.