Design On A Chaotic Shell Of The Inflation (Our Universe)

We are the first generation to know the approximate age of the universe, its likely origin, the main lines of its history, and its fundamental principles. The beginning of this research is a polemic that makes everyone see the world as it is.

Accepting this principle inevitably follows with the most significant thing that we know, the cosmos, and the ever-lasting questions about its nature. Studying and discussing the different theories of the world-emergence, either scientific or not, might be the best, more tranquil about the big bang. 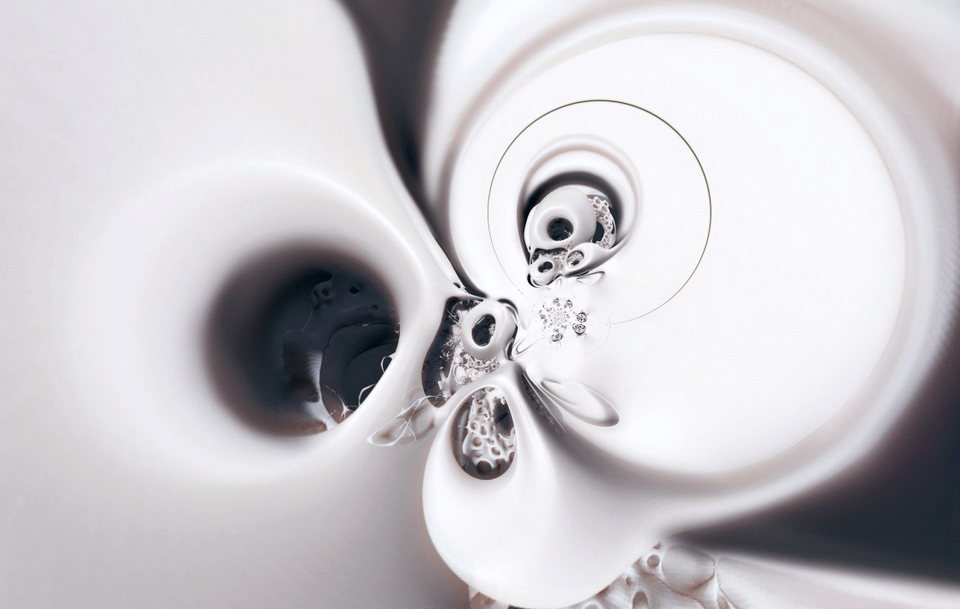 Here now discovering that the whole world is expanding & unlimited, as one of the thinking-revolutions of the 20th century. Theory of relativity that broke the mechanical world and its fixed space and time by representing a new definition for Gravity, quantum mechanics that was incompatible with Einstein’s, the theories that were to relate or match the two, and lots of other theories have profoundly changed the basis of our society, specifically art, and the taste to approve it.

According to the importance of the subject even away from physics as its original field, this project uses these theories as a medium to reach its architecture along a path starting from everything as a whole which consists of the cosmos, the macro scale towards nothing, chaos, and the micro-scale.

Through this path, the researcher knows the rules of creating geometries, which is the first step in designing on the “Chaotic Shell of the Inflation” and spares the cosmology center in an endless desert as its function. 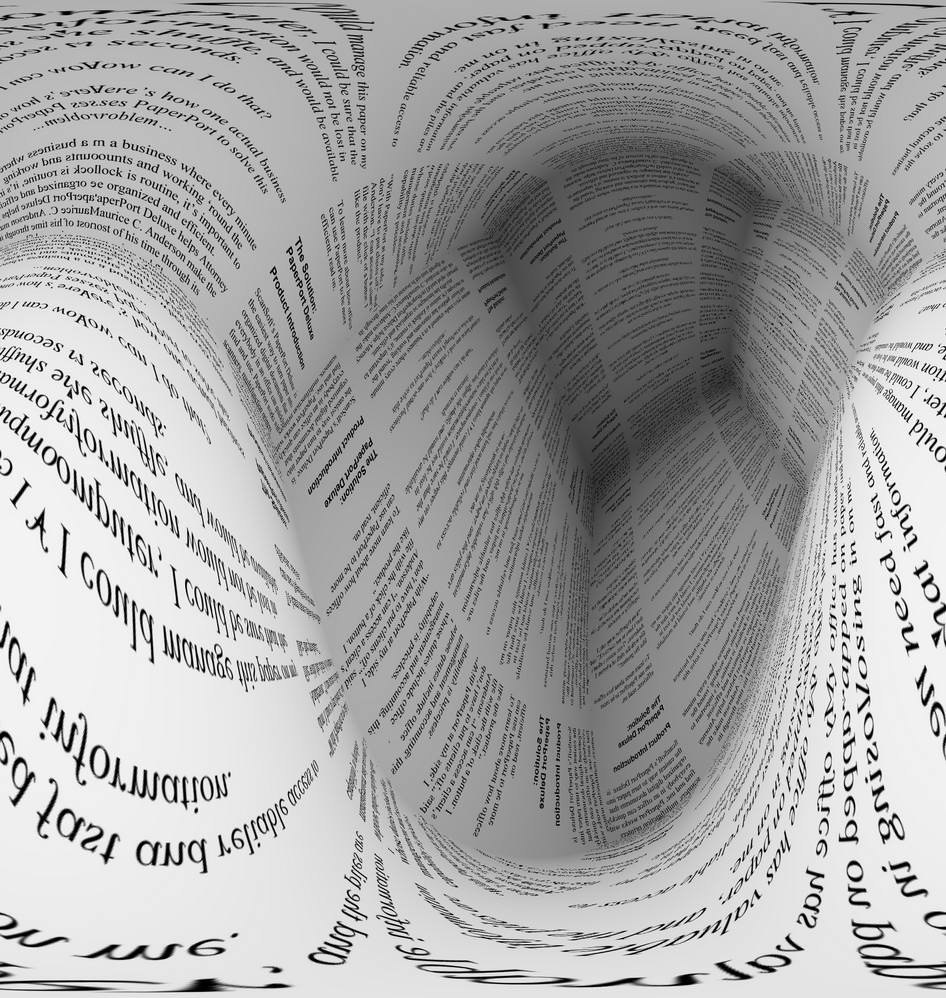 Examining the geometries of the fractal and the hyperspace, as the only geometry related to the fourth dimension, their different kinds, and their rules, and decoding their hidden dimensions, quickens the understanding of such architecture. 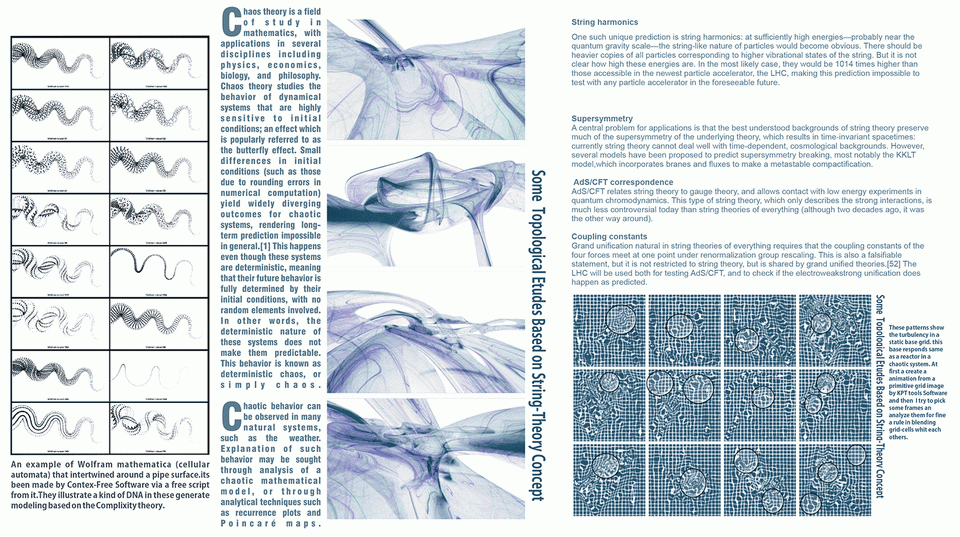 Selecting the fractal geometry, resulting from chaos theory in its particular scale, and placing it in a deformer function, gives out the coordinates of a new geometry closely related to the nature of the research (i.e. cosmology).

Flames Algorithms as Inception of the Design

The flame geometry, which somehow works in a field beyond the two known dimensions of geometry, is a result of an eliminating system that, even with controlled inputting data, it is still uncontrollable and finally forms an architecture that is the trial-and-error of the researcher in composing logic and sense, through an in-between phase which is an accident. 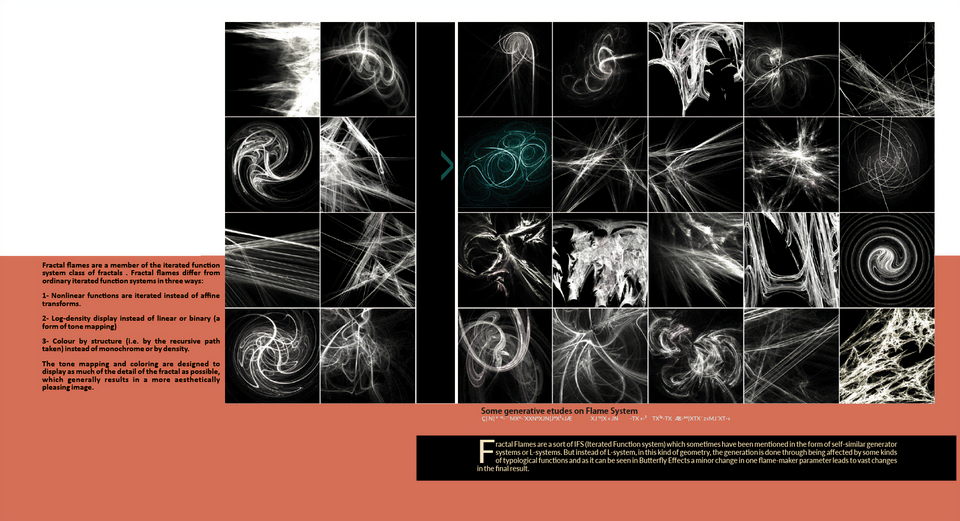 Generally, selecting the site was based on the presence of desert, and there have been limited reasons for stabilizing it in one place. Therefore, we first proceed to the desert site and then to the reason for constructing such a place. 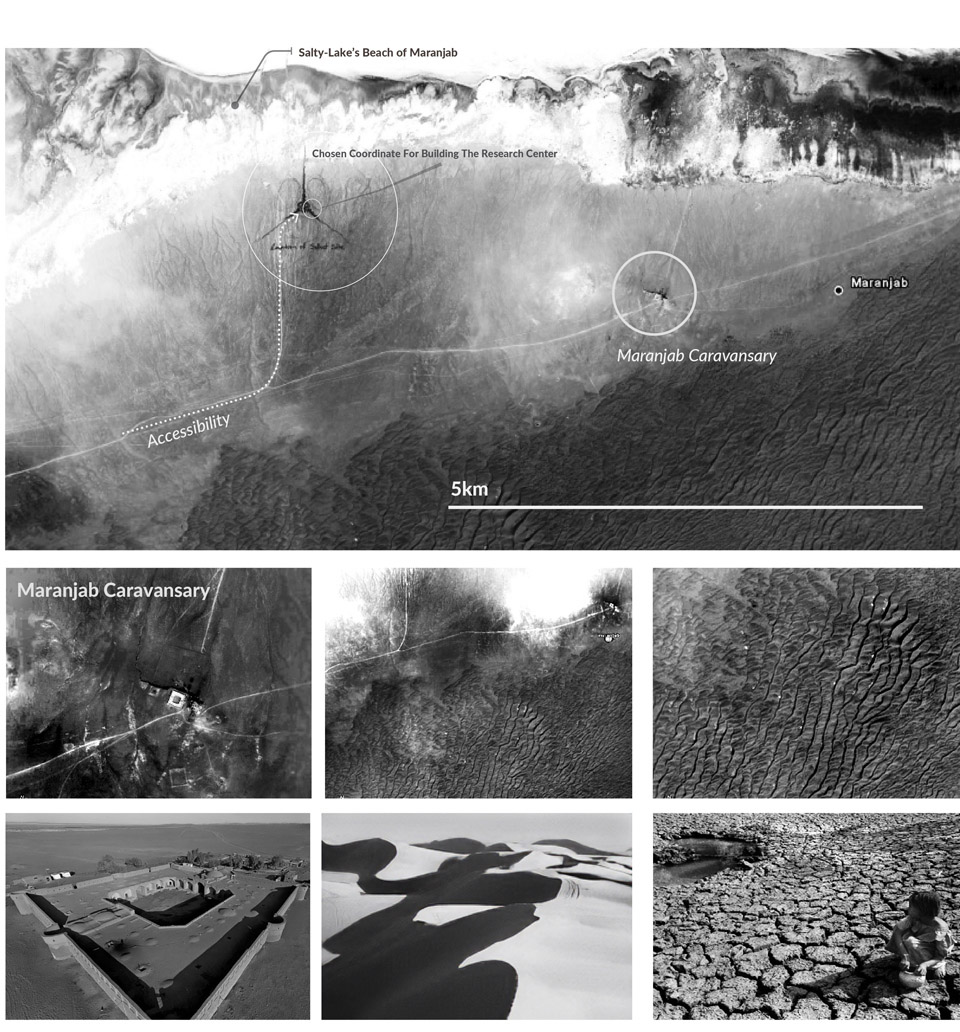 The most significant reasons supporting the location chosen for the project:

The project was designed in the desert of Maranjab, in the center of the Iran plateau. The concepts behind the project arise from the vision a cosmologist may have. A cosmology researcher observes the universe as a continuous manifold of space and time. Like a fabric surface, the space-time manifold can continuously connect the future to the past as the connection of up to down. A manifold offers the most general setting where we can use calculus. 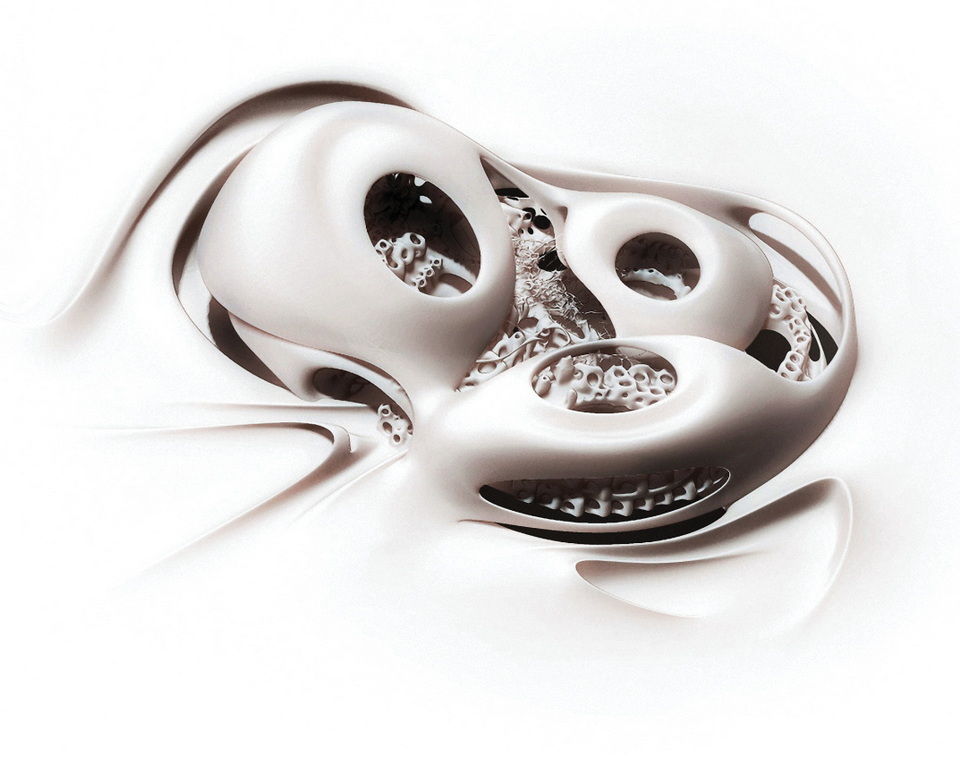 Consider the following observation. When someone throws an object across the room, it follows a continuous path. In other words, there are no jumps in its trajectory; it does not just disappear at one point and reappear at another. This simple observation tells one a lot about modeling the physical world classically. Therefore, the principal target the design should approach was resembling this vision for others. 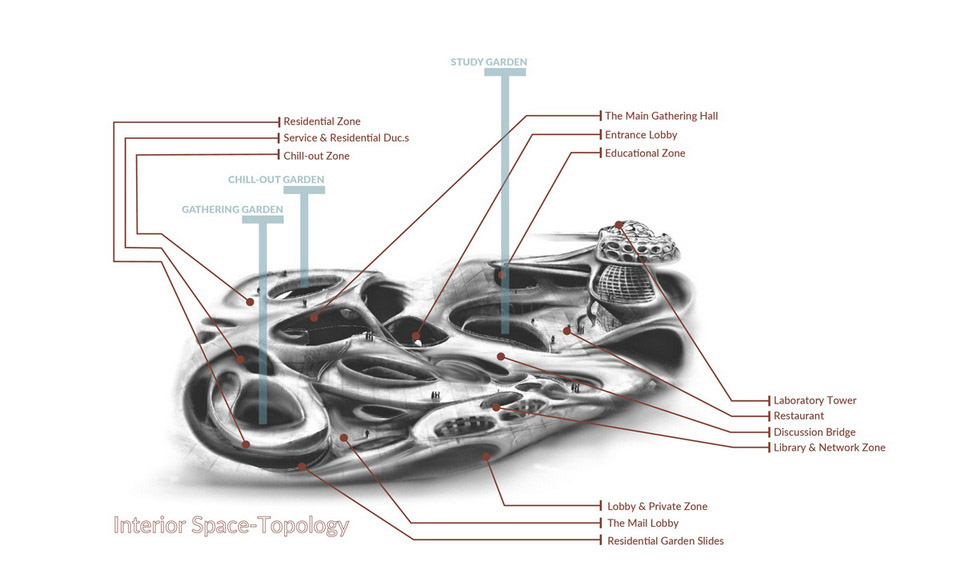 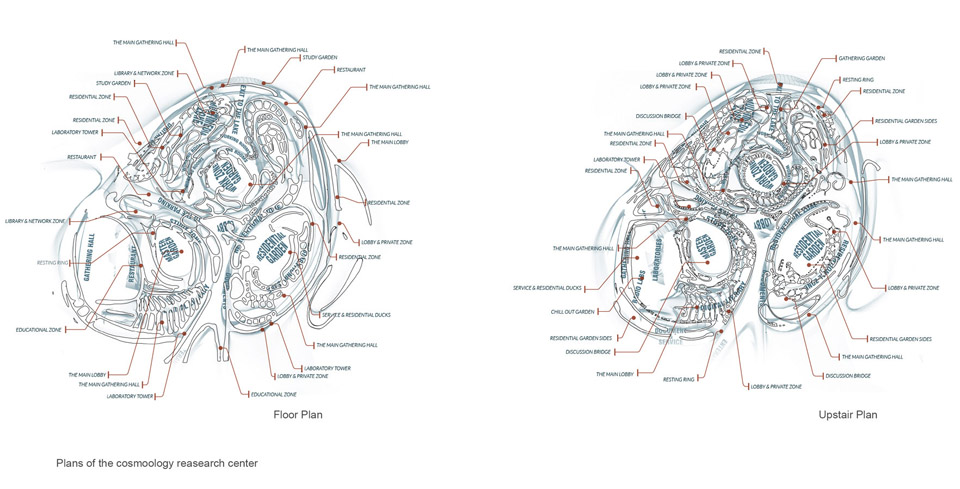 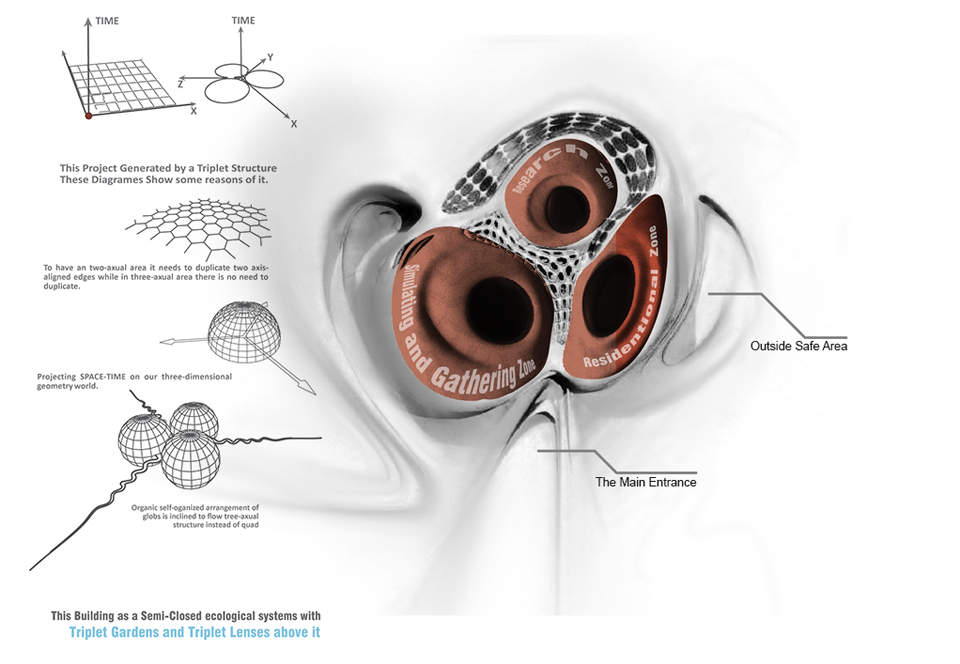 Each part has its garden, located in the center of each section.

These triple gardens are provided with a semi-close ecosystem that supplies them with proper light, humidity, and temperature since the desert climate prevents any plant from surviving.

Gardens are covered with triple-lens that technologically adjust the light and artificial participation.

This complex should provide the users with all the necessities people need in modern metropolia. However, it gathered all under a bubble consisting of other bubble-like parts. Therefore, this research center comprises three major parts. 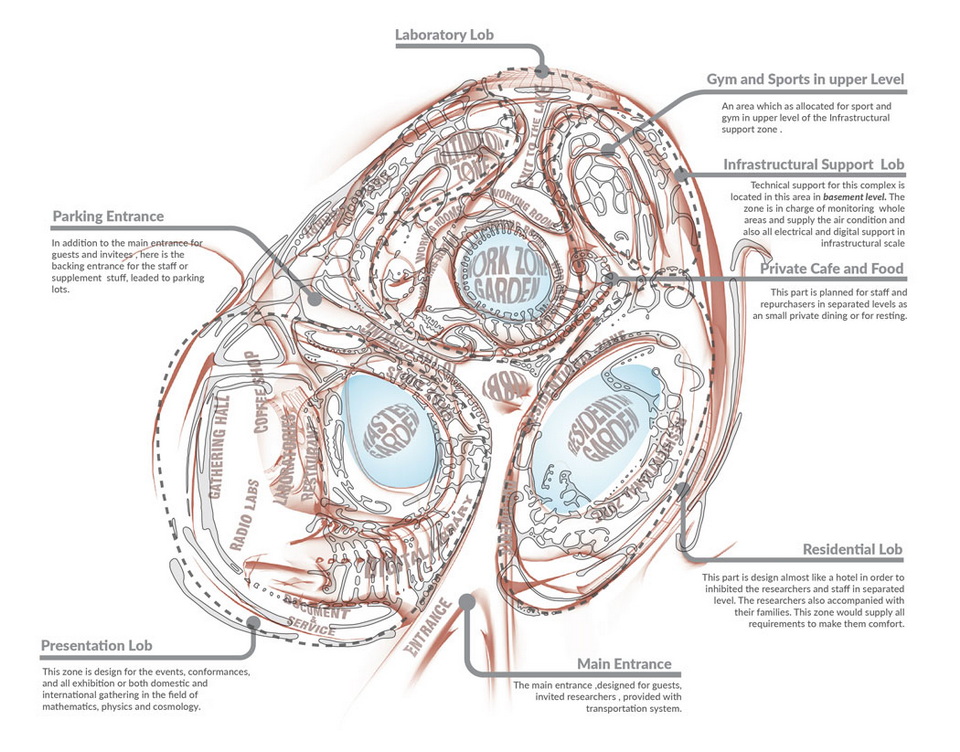 The simultaneous operation of this site is impaired due to the aimlessness and disorientation of the elements within. In this project, the aimless feature reinforcement has been used to weaken the aimless feature in this site, which can be seen in the paths, construction components, and gardens. These lines point to no point and outline the path for the audience. As they move away from the river, all geographical directions fade, and the directionless paths strengthen the desire to walk at heights. 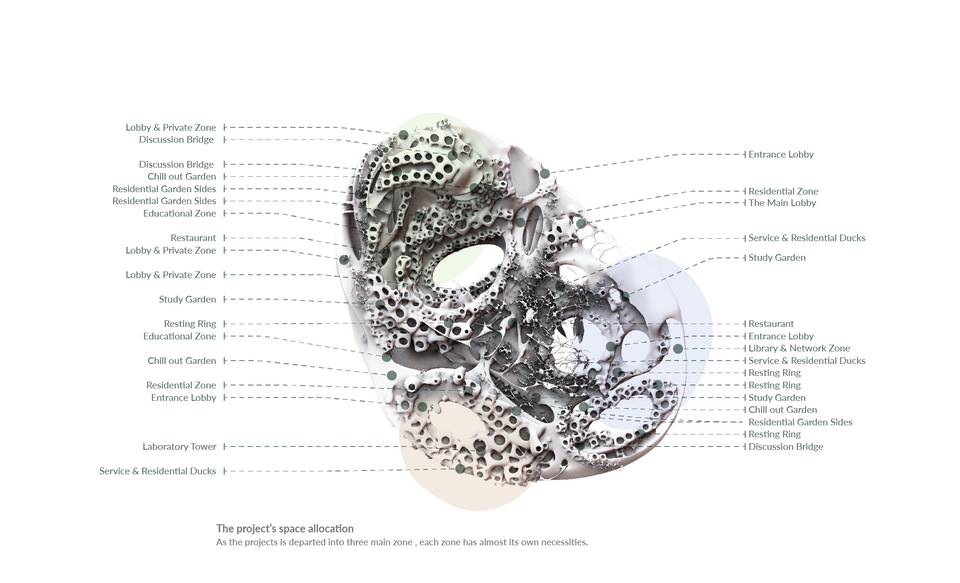