As the project owner, Kerman’s Omran Alavi Corporation decided to invest in a 75-hectare urban planning investigation and structural design of a first-place of “7 ALAVI GARDEN,” including surrounding areas and a monumental building inside the square. 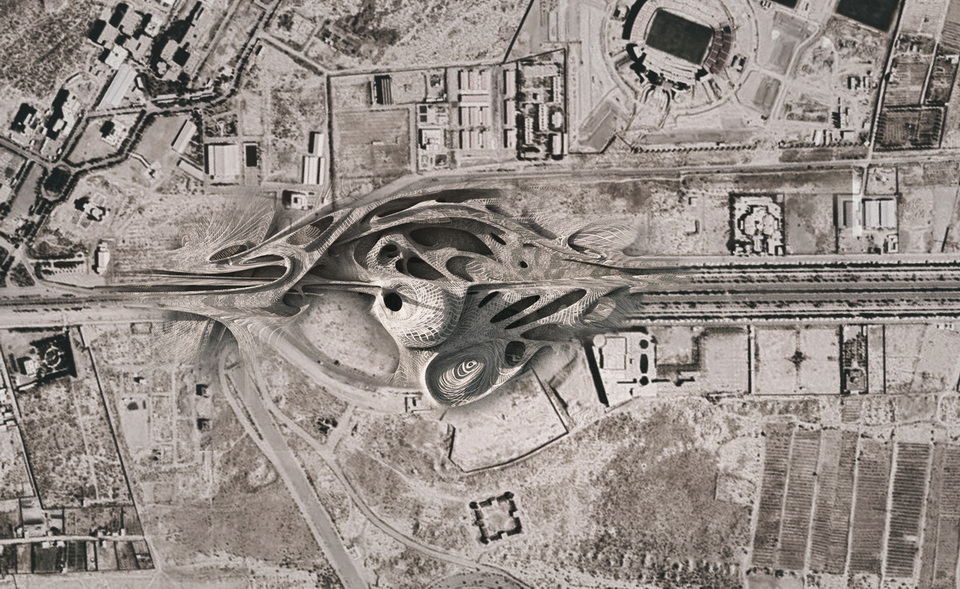 The aims included considering both climate and geographical conditions and noticing the historical and cultural features of the area, Kerman, Iran, and designing the project as the most logistic entrance of the city needed an economic feasibility study to choose and suggest the appropriate urban, cultural and touristic facilities. Giving appropriate suggestions for traffic and area accessibilities based on conditions like the possibility of private parking for travelers, stop stations for different vehicles, family meetings within site, Kerman entrance from south-east, accessibilities to important buildings and local areas around.

They also desired to incorporate the site’s landscape and suggested an appropriate idea for a global symbolic urban element. It should have provided appropriate views and perspectives all around the site according to the vicinity of the interior place and built technologies and carried the visibility from far distances. 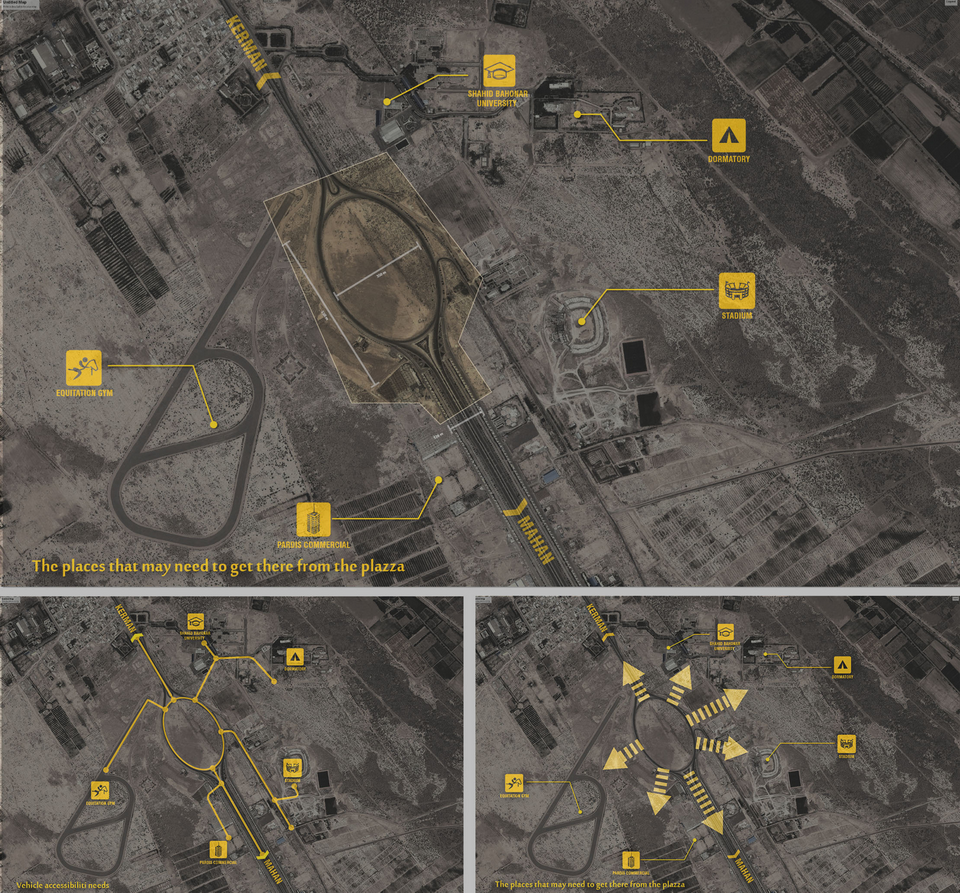 Introduction: 1st place of 7 Alavi garden Highway, known as “1st SKY” is located to the northern end point of Alavi highway, 5km far from the Kerman downtown, which is the main causeway between Kerman and Mahan.

The first solution could be using an intersection with different levels to meet three goals: Organizing complicated traffic. Secondly, due to the harsh climatic conditions despite Kerman’s nature, not only do we seek refuge from the extreme heat of the surface to cool underground levels, but in winters, we can make the most of the earth’s heat not to worry about wind. Thirdly, under the umbrella of these aerial directions, we have the opportunity to find a shelter and experience exciting places.

The question is whether it belongs to Iran or not? As literature constructs, the foundation of Iranian culture and calligraphy symbolizes literature, experiencing flow in Nastealigh geometry could contribute to promoting the ideology behind this concept, and it generates local memories. On the other hand, Since this project is placed at the beginning of the agnostic (mystical) path to reach Shah Nemat Allah s shrine, which many people believe in, observing this fact might have contributed to the cultural sustainability of this project.

attracting local tourists who hike, cycle, or use any other public transportation.

The outer circle will give a general view to whole site

The main garden is consisting of Offices, Commercials & restaurants within 7 levels under the ground.

Emphasizing on the natural potentials of the hill by its height increasing.

There are athletic and touristic places under the hill such as Bowling, Karting, Billiard and Joy town.

Moving underground and placing in the shade to escape the summer sun and conducting the winter solar radiation to the depth of the building and optimal using of the potential energy of soil.

The 180m outlook tower as a symbol of faith. 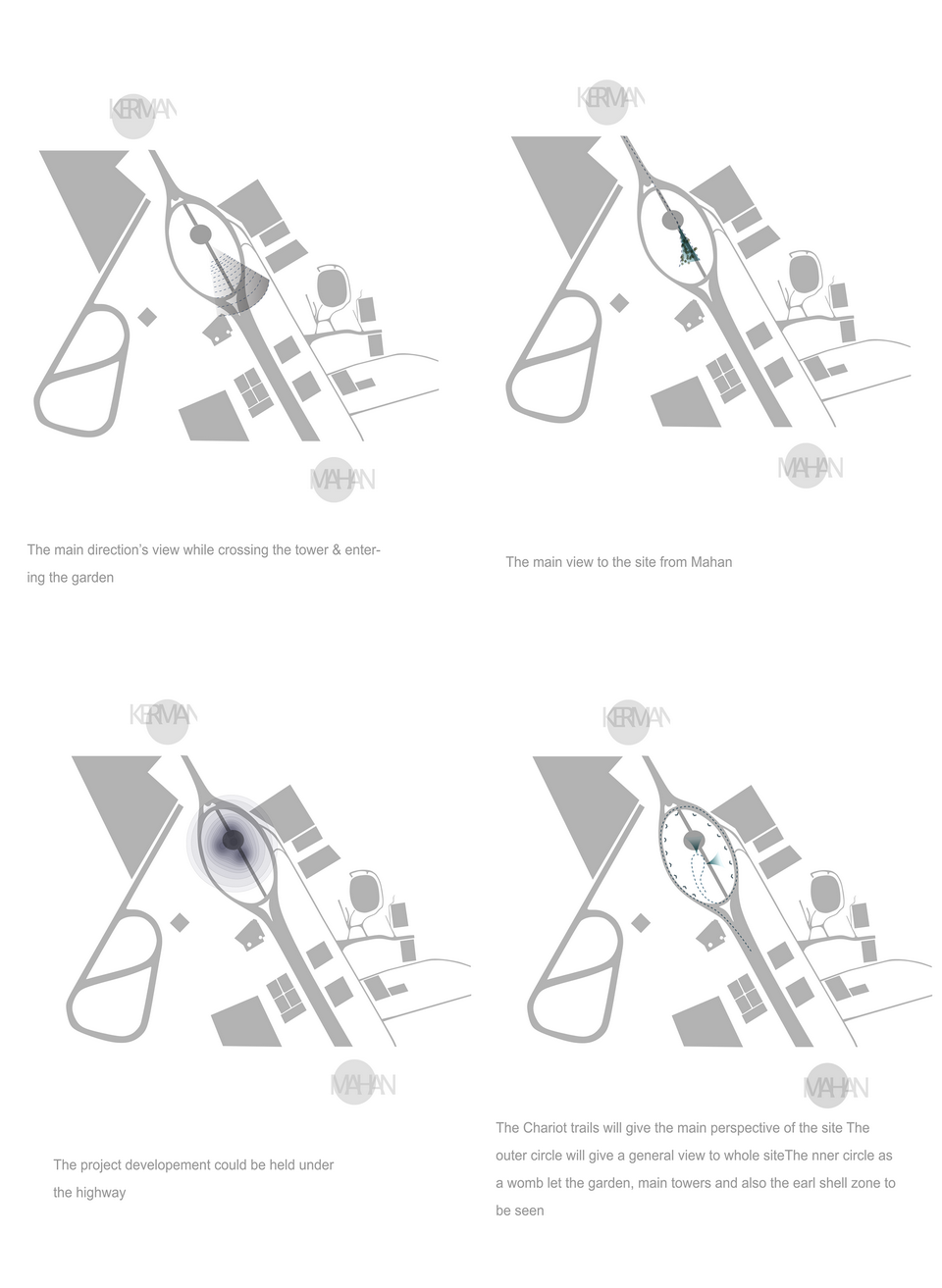 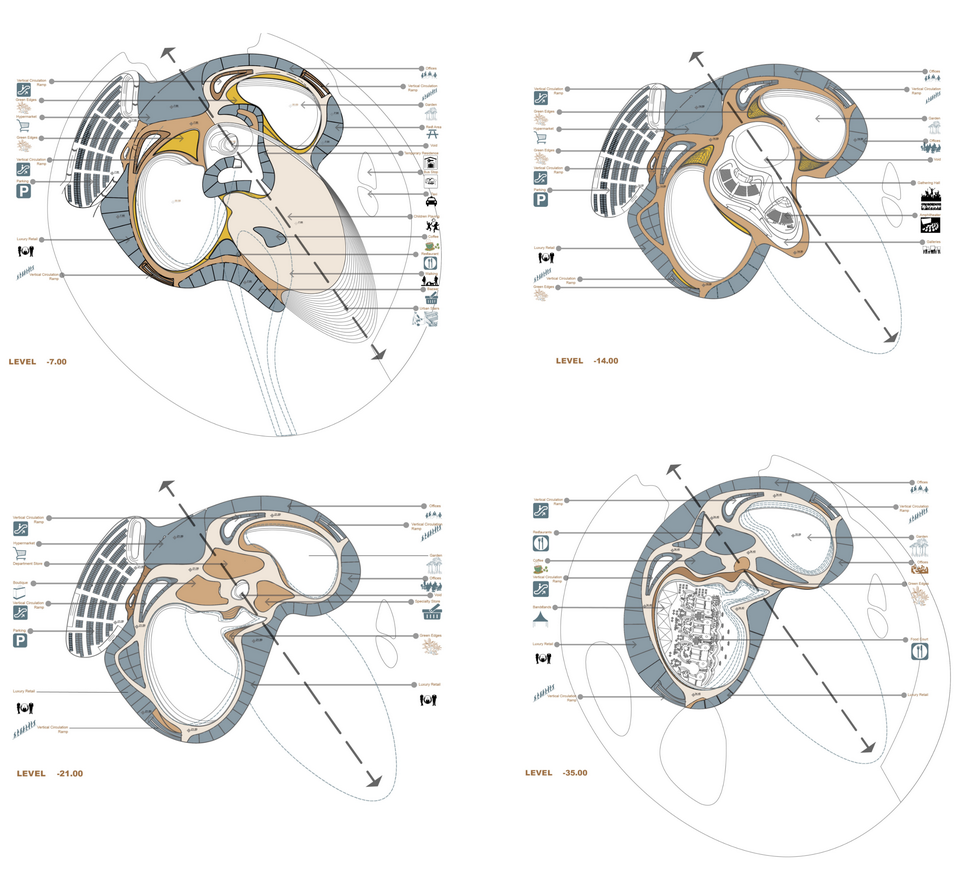 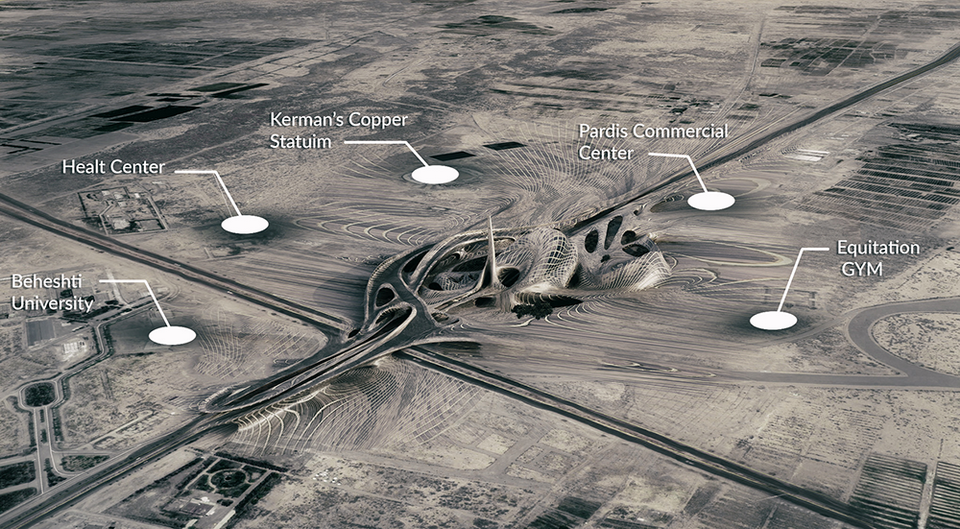 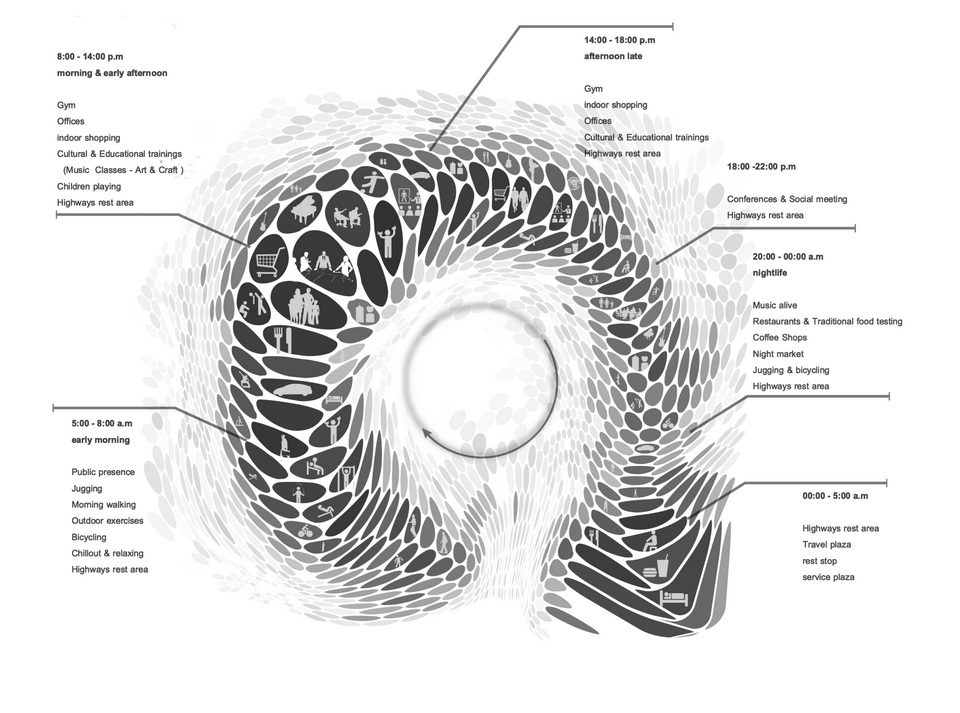 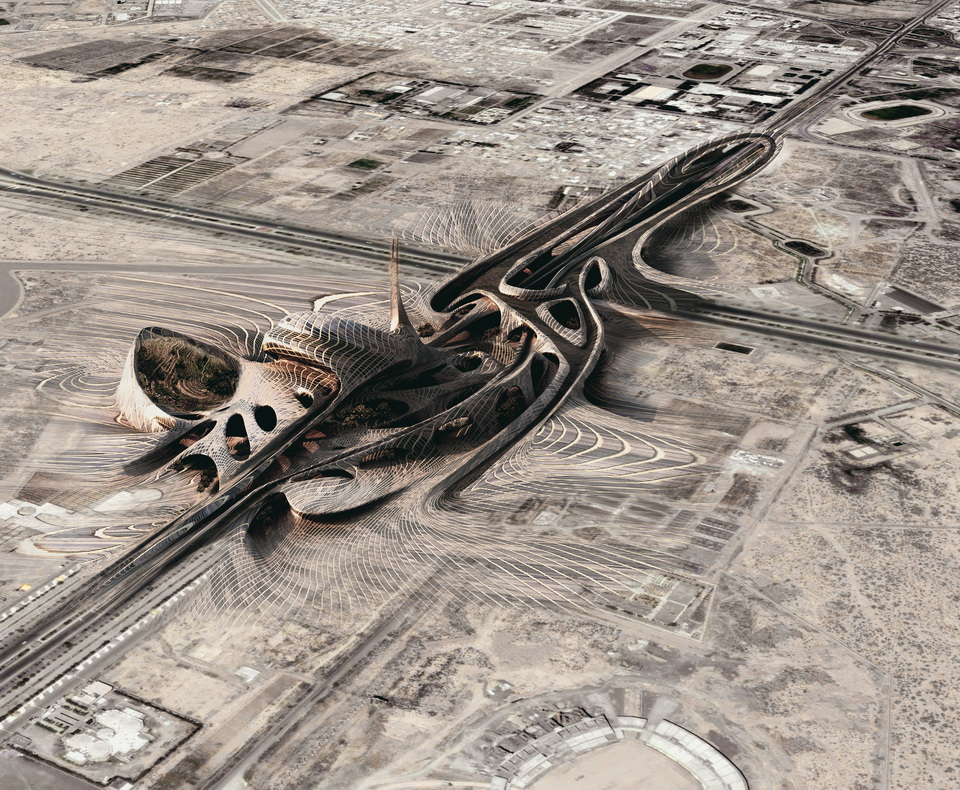 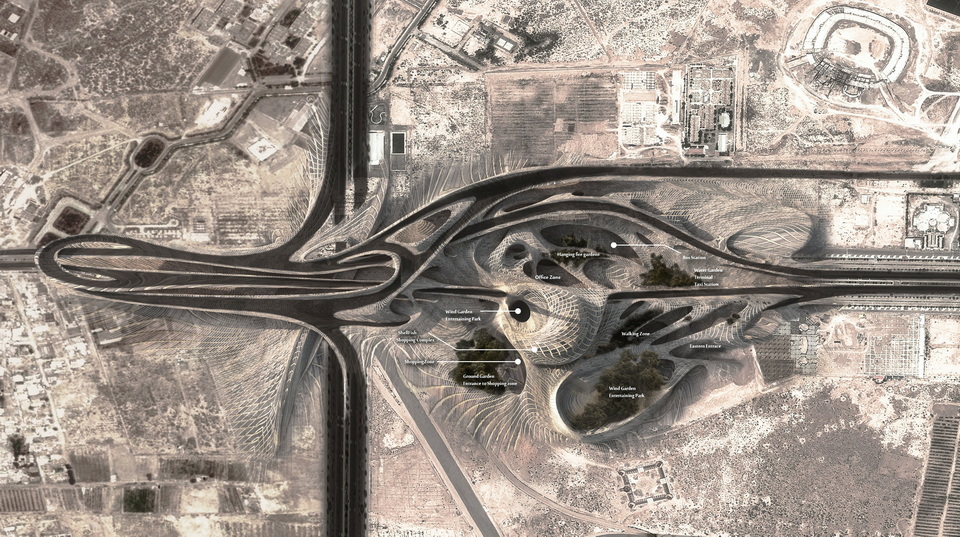