The Night-Club Hotel of Hong Kong 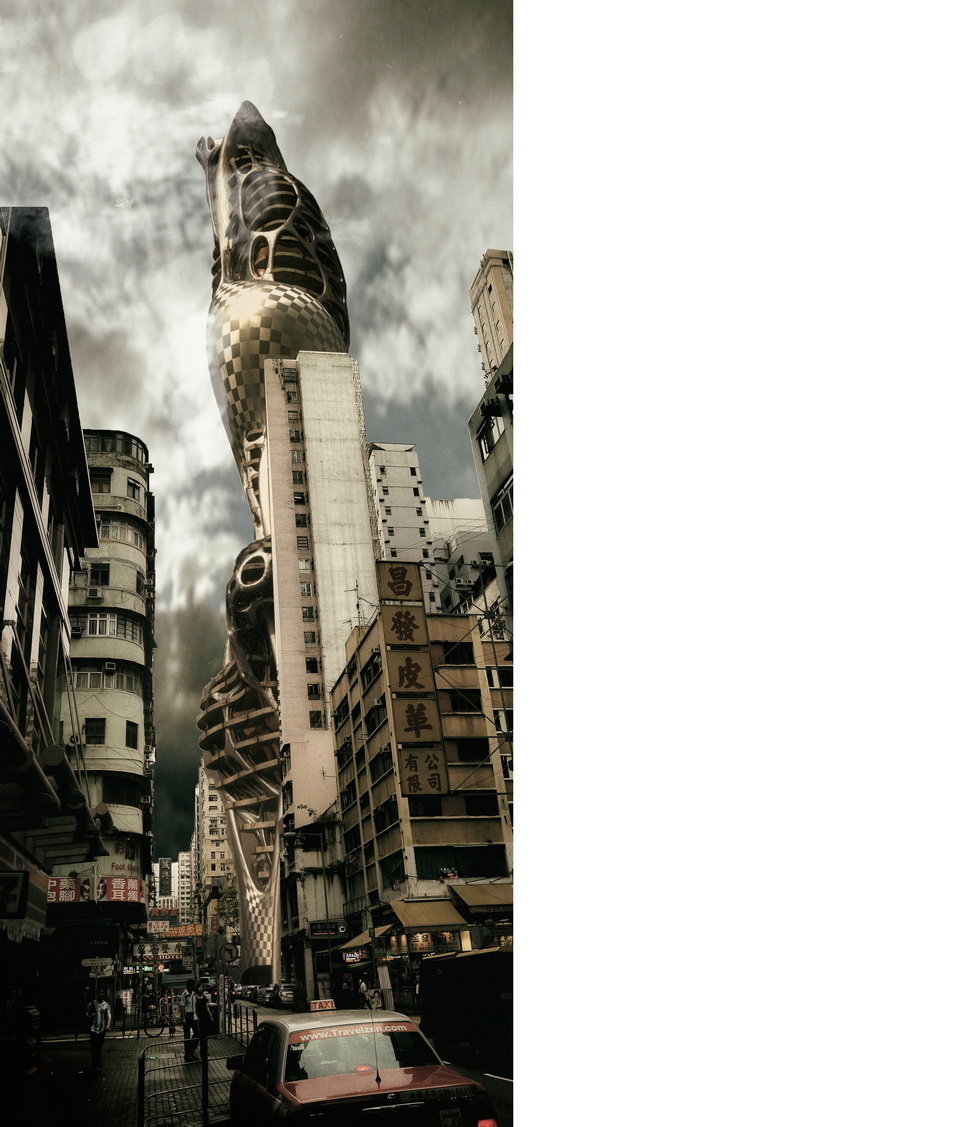 The Special Administrative Region of Hong Kong of the People’s Republic of China, better known as Hong Kong is a special administrative region in southern China formed by a peninsula and a number of islands, situated on China’s southern coast and enclosed by the South China Sea and the Pearl River Delta, along with the cities of Canton and Macao. It was a British colony until July 1997.

Hong Kong is an emporium characterized by international banking, a liberal economy, and liberal attitudes towards sex. Yes, sex! Because Hong Kong is an enclave for “yuppies” and foreign executives, the sex industry, nightclub scene, and luxury hotel market represent an enormous attraction for many executives. 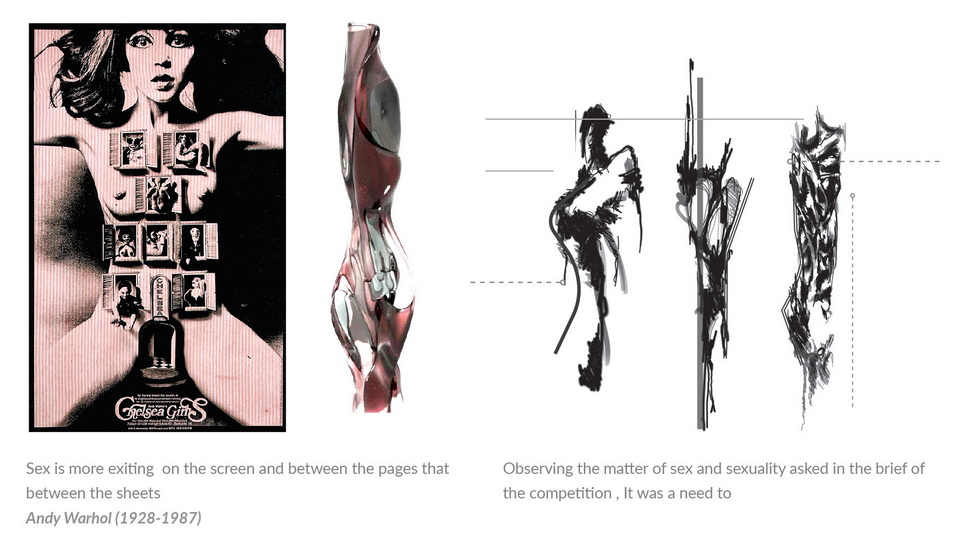 And that is why ARQUITECTUM has chosen for this competition the famous “red light” district of Mong Kok (Portland Street). And we have decided to tackle a thorny but nevertheless very interesting subject: a “Luxury Adult Club-Hotel”, where eroticism comes together with architecture, demonstrating in this way that architecture is relevant to all aspects of life and any project can be resolved in an interesting and creative manner when planned from the very beginning.

OBJECTIVES OF THE COMPETITION:

• Promote the work of an architect on a global level in order to facilitate, eventually, their access to the restricted and difficult Chinese architectural design market.
• Gather together architectural ideas from around the world to enable the selection of the best project to be developed in Hong Kong.
• To bring together the best ideas associated with urban awareness which, at the same time, are capable of reflecting both Chinese culture and that of the western world.
• To generate the discussion of ideas regarding intervention in unconventional projects.

THE PROJECT: A TOWER – NIGHTCLUB HOTEL

The “Luxury Nightclub Hotel” being proposed aims to be an original building, not only devoted to adult entertainment but also a venue for shows (like those presented at the Moulin Rouge in Paris), a place of relaxation with a massage service and a spa, as well as a first-class hotel, and, above all, a system of customer service based on the contemporary parameters of “zero ecological impact”, fostering a new type of habitability (such as self-generated energy), basic maintenance (a minimal number of employees tasked with cleaning) and an almost total absence of contaminating waste (making use of joint services, the classification of biodegradable and non-degradable waste and employment of clean energy). 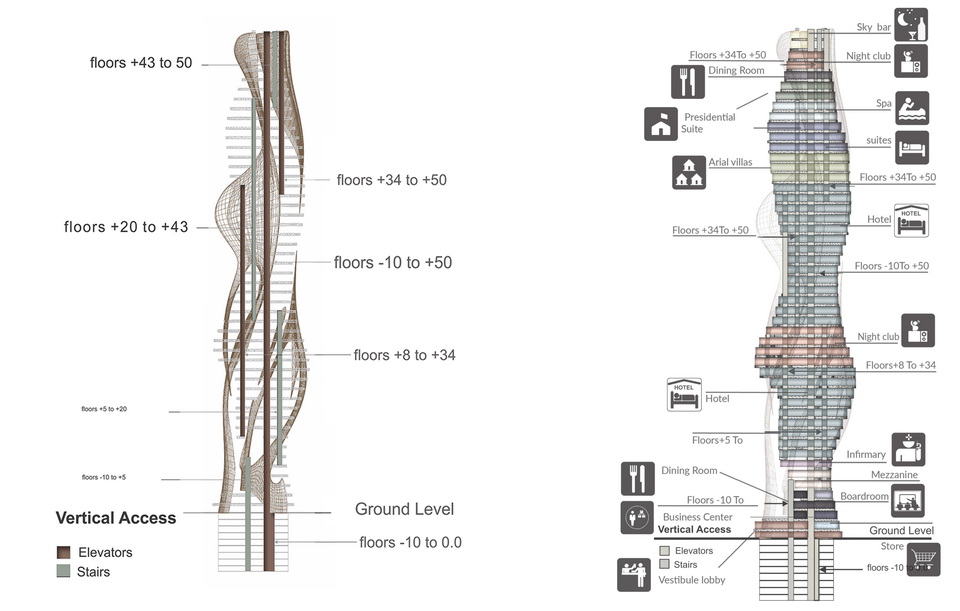 The objective of this “Nightclub Hotel” is that of providing guests with an agreeable experience in a hygienic, safe, and high-class environment where they can spend the night and wake up in Hong Kong, while at the same time providing them, within the same premises, with a unique sensorial experience.

The competition aims to create an avant-garde concept within the field of accommodation and adult entertainment that will form part of any initiative –private or public- for an integrated project, to be presented together with other technical reports (hotel feasibility study, environmental impact study, financial investment proposal, statistical study of tourism figures), leading to the future construction of a project of this type. To this end, the “Nightclub Hotel” will consist of a basic plan that will occupy a constructed area of 25,000 square meters. 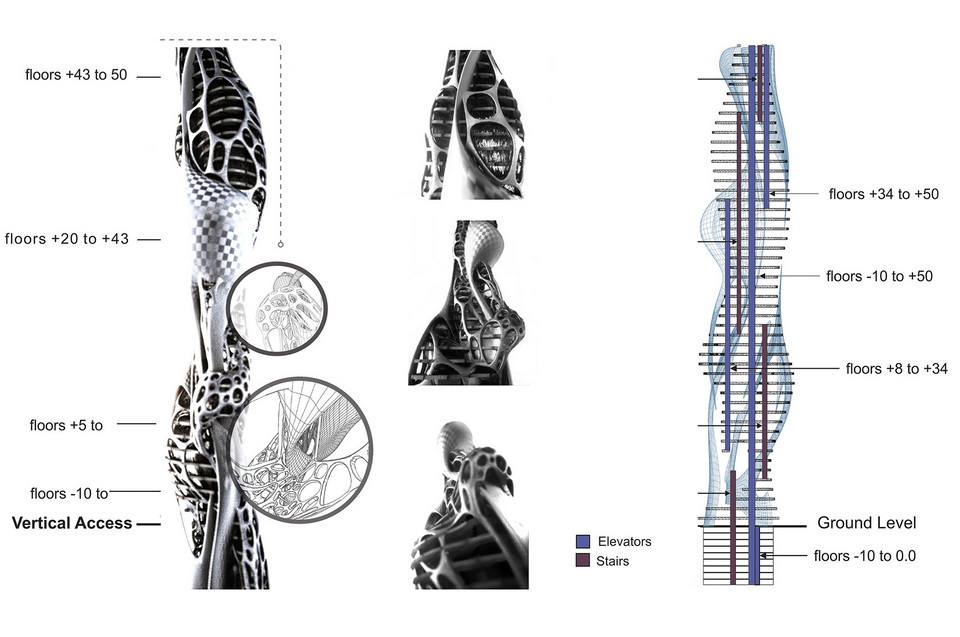 • 4 emergency/service stairways.
• 2 service elevators with access to all the exhibition rooms from the loading bay.
• 6 elevators for use by the general public.
• Treatment of the public plaza opposite the building.

The district of Mong Kok is located towards the north, while the sea surrounds this piece of land to the south, east, and west and the emblematic buildings of the financial district of Hong Kong can all be seen, as well as the famous district of Wan Chai.

There are no restrictions in terms of the use of materials, and therefore materials might include marble (as cladding), metal (in sheets), wood (as an appliqué), steel (in the structure or cladding), aluminum (in plates or exterior sun shields of any type), exposed concrete or plaster (as an exterior finishing), as long as they are justifiable within the context of the proposal and fit with the overall image of the building. Vegetation: Vegetation may be included in any part of the building.

The tower should have a contemporary image that is up-to-date and avant-garde so that it will be recognized as a “cosmopolitan” building, capable of occupying any space within the “global village”. 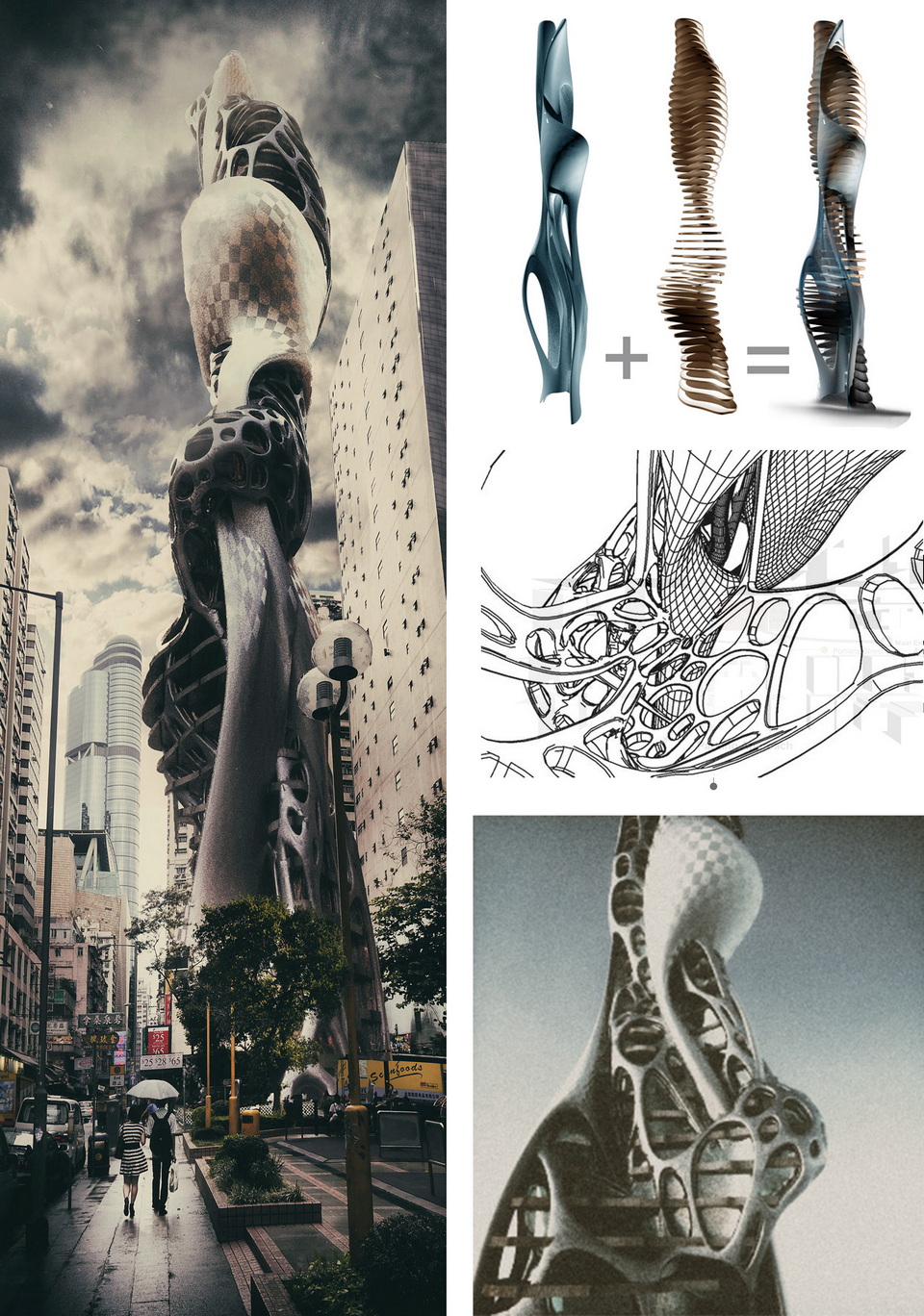 “One country, two systems” was taken almost literally to be the main concept of our design, turning it into: “ONE BUILDING, TWO SYSTEMS”. This duality was seen in many different aspects of the building. The tower has a smooth “organic form” in contrast to all the surrounding box form buildings. This organic creature is the result of its context, only deliberately opposing to and in contrast with its surroundings. The duality is interpreted through the following features and ideas: conventional box form/ unconventional free form, masculine/feminine, solid/transparent, structure/ free space, heavy/ light, light/dark, etc. 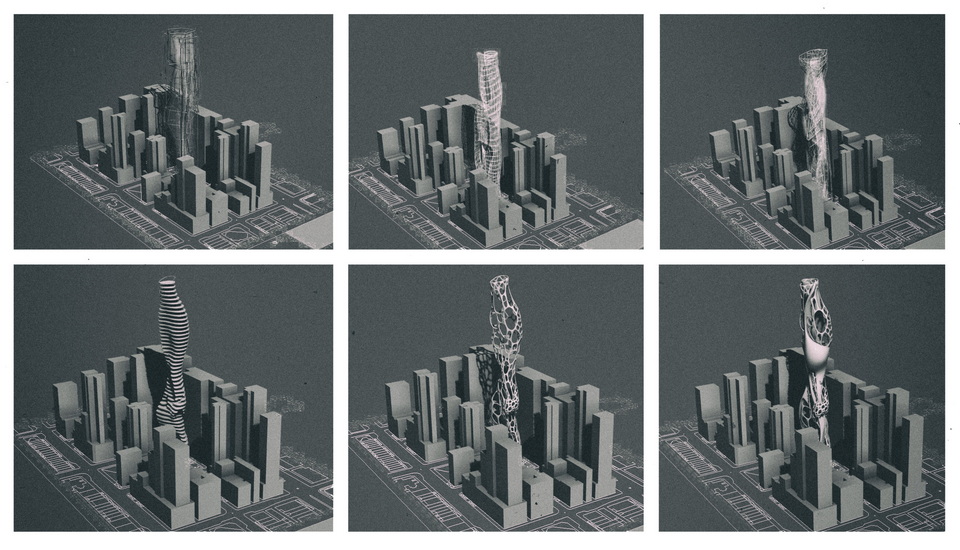 The main structure is the heavy solid body of the tower combined with the main elevator’s core.
The vertical circulation system which is one of the most important parameters in any tower is resolved by introducing 4 different elevator cores each holding two elevators inside, giving the tower a total of eight elevators two of which run along with all the height of the tower from floor -10 all the way up to the very top, and the other six elevators are divided into various sections of the tower according to spatial divisions, needs, and vertical organization. 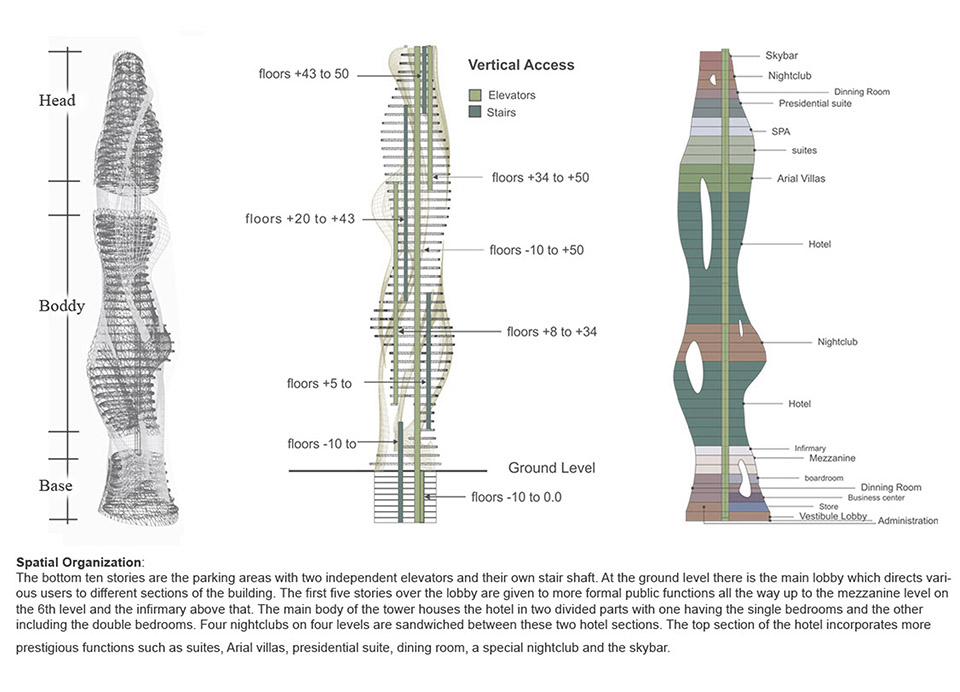 The main orientation of the tower is towards the South and Southwest to give the best view of the sea. Although the waters can be seen on the Eastern side too, the water on the South and Southwest is much closer. The main imposing side of the building is also the one on Portland Street, being the main road in comparison to the other sides. Major projections of the building are also over Portland Street.

The main entrance to the building is on Portland Street and the ground level surrounded with glass sheets works in direct relation to the sitting area outside. The parking entrance is located on the corner of Soy and Portland, allowing cars to use both streets to approach the parking.

The bottom ten stories are the parking areas with two independent elevators and their own stair shaft. At the ground level, there is the main lobby which directs various users to different sections of the building. The first five stories over the lobby are given to more formal public functions all the way up to the mezzanine level on the 6th level and the infirmary above that. The main body of the tower houses the hotel in two divided parts with one having single bedrooms and the other including the double bedrooms. Four nightclubs on four levels are sandwiched between these two hotel sections. The top section of the hotel incorporates more prestigious functions such as suites, Arial villas, a presidential suite, a dining room, a special nightclub, and the sky bar.