To enhance using Arduino for architects, We created Heteroduino, an interface plugin for grasshopper, to simplify the implementation of this device and similar micro-controllers effectively via Rhino and Grasshopper, some of the most favorable design platform software, which has been tried to bring the most capability to communicate to Arduino. The latest beta release provided this workshop with special features being underdeveloped depending on the projects. Under the supervision of the Helioripple team and its correlated contributed plugin, the Heteroduino workshop focused on digital logic accessing architectural intervention in surrounding space using microcontrollers. Along with these criteria, after being familiar with devices, students came up with designing their prototypes using Heteroduino as an interface between grasshopper and Arduino. Arduino is an interface tool for creating a sort of computer-like device, which not only senses our surrounding physical space but makes changes into that. In other words, this tool is a physical computing platform provided by a simple microcontroller board. Also, it is a developing field for programmers to customize their tools via a developing feature name IDE. Creating interactive objects, Arduino can receive input data from several sensors and send controlling commands to lights, motors, pumps, switches, and other physical actuators.

Accessing quickly to this Arduino makes this device this popular for artists and architects all over the world; having no expected knowledge of robotics and electronics makes them able to not only discover their surrounding world differently but also come up with some inventions in responsive and interactive fields or customize their design tools.

The act of producing architecture is a collaborative, interdisciplinary exercise, and architects design with knowledge from many branches of study. Architecture involves the coordination of building projects, which themselves are products of a wide range of technologies and systems. Buildings are constructed and procured within a complex ecology of different disciplines, building trades, economic markets, and legal regulations. However, developments in digital technology continue to introduce new design methods and tools to the practice of architecture. Performance simulation, information modeling, and algorithmic design are now part of the expected skill set of the architect, and these new skills require knowledge from multiple disciplines.

Imagine a city speaking in its own way; you would be its god. Maybe you are that marionette of the game. But this time, your hands would make the city obedient. The city would dance with you, would breathe, would make it dark or bright. and you obtain the pulse of the city.

”Kublai Khan does not necessarily believe everything Marko Polo says when he describes the cities visited on his expeditions, but the emperor of Tartars does keep on listening to the young Venetian with greater attention and curiosity than he shows to any other messenger or explorer of his…” 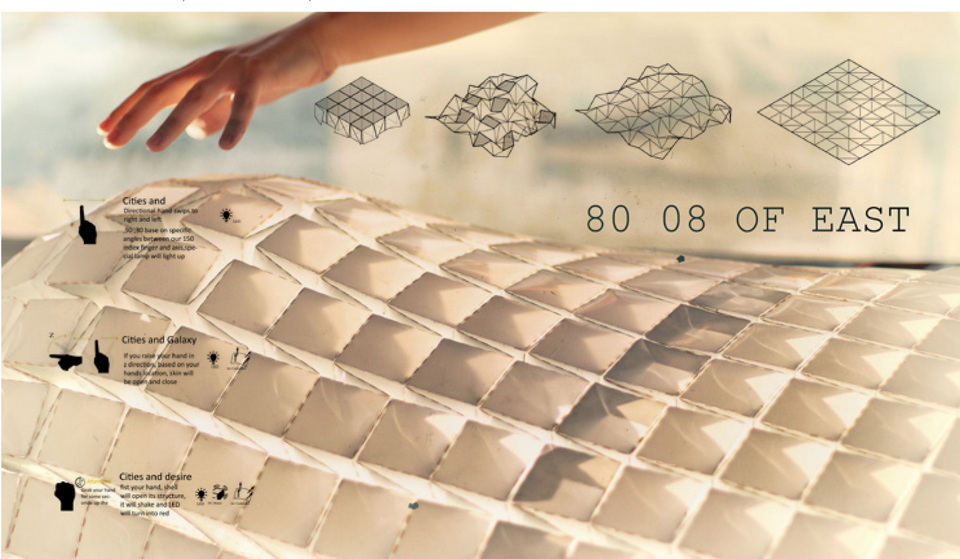 8008 of East is a fictitious city. If you get familiar with the rules and their real souls, you will be able to interact with them. Someone can change its form in many different shapes based on various hand gestures. There must have been a responsive surface to make this mobile city. In this way, many alternatives were made by origami, and various materials were tested considering the limited facilities. An origami with square subunits was chosen.

And finally, PVC sheet was used as a bending tissue due to its flexibility, foldable nature, and its capability of having memory. Changes of this shell are controlled by using a leap motion, an Arduino, three air controllers, four LEDs, and a DC motor. All of the actuators come together in a box that is under the origami shell. The Interactive language with the city is recognized by leap motion, and it is based on the location of fingers on the basis of absolute or comparative vectors, and the information is sent to the grasshopper plugin. Based on definitions, the Heteroduino plugin ( a connection between computer and Arduino) sends the information to actuators, and the result is the alterations that are made by compressors and LEDs.

Plum-Tree, as an interactive instrument, provides a musical experience in the social aspects and spatial side as well. Having tweaked the Delta-z Project, ‘Plum-Tree’ enhanced the pavilion to add a new interactive layer. The most noticeable feature about this architecture project is that it is a sensor needing additional sensors, which turns it into a “Project without sensor module.” There are two kinds of “sensory input” in this project: 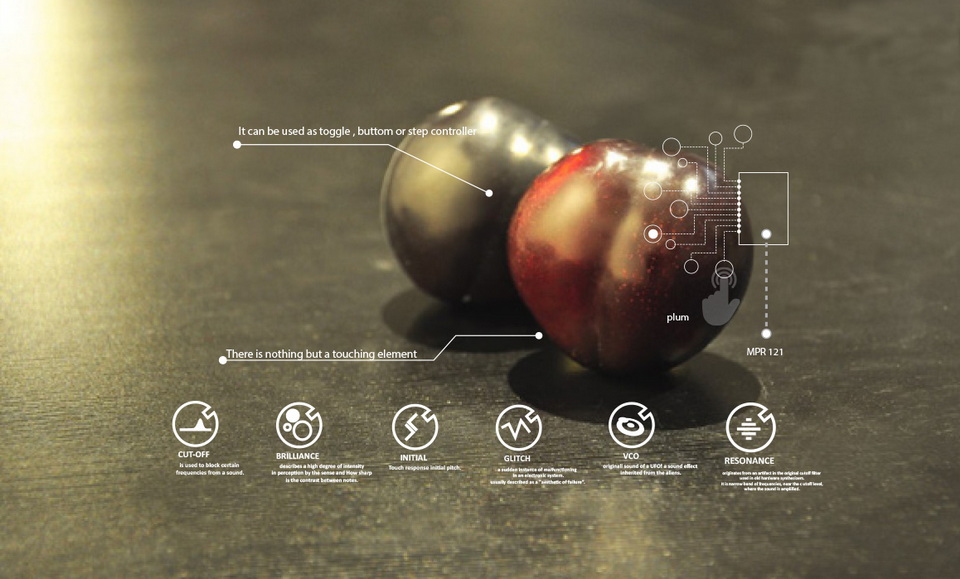 The Delta-z project, with its promising design potential, was designed to provide a modern public space for Caai School. Although it’s astonishing in design, shortcomings like improper positioning and lack of required shading have led to a lack of interaction and attention for individuals.

The Plum Tree project has turned this abandoned structure into a vibrant and live atmosphere by using musical sequences and notes. With Arduino Uno, the gathered charge in the Plum Tree is inserted and processed as input for the grasshopper. After that, the Heteroptera plugin’s input will be used in Cicada (plugin for grasshopper) as an output. Finally, the gathered data enters the loop midi and turns into MIDI musical notes, which now is ready for mixing and composing in FL studio software.

The Plum Tree project is strong evidence stating that the presence of music by itself could give new life to a leftover space and encourage people to interact with existing architectural elements in such a medium. The Plum Tree is an organism with music as its beating heart. It senses every movement and motion around. It senses touch and presence without any sensors in an unexpected way termed capacitive sense. This project is also a musical platform that could be used by any instrument player, composer, or street artist to communicate with the public or perform in it as much as it follows the standards of MIDI, communicating with all devices and software supporting MIDI. The Plum Tree project originally derives from the story of Adam & Eve and their unforgiven touch of the forbidden tree. The plum is the replaced element in our narration of this story, standing for all the inaccessible and untouchable taboos for human beings to draw on.

The whiteness of the walls, the gray shades of concrete, and the presence of each individual means an intersection among the attendance of technology, pen, and us eventuates in O-Pen. O-Pen is the emergence of new intellectual viewpoints in applying technology to street art and urban communication and explores how technology can empower individuals creatively to alto and reclaim their surroundings. Pursuing the integration of democracy, art, and technology, “O-Pen” authorizes general users to design and draw on any dimension, any scale, and on any planar wall like a designer or graphic artist and display their message to other community members.

By renovating the “Spider plotter” project, which was a system designed for wall-plotting, which itself was branched from a 2013 project somewhere around 2015. Spider plotter’s achievement was solving the problem of separating pen and paper at the end of a drawing line. We gave it the capability to draw on any surface and thus re-envision and develop it further by adding sonar sensors.

Helioripple teams were honored to grasp both Tadagrant and Tadafund projects in Tadaex 2018 with both teams. On behalf of Helioripple, Amin Bahrami became the mentor for both projects. Moreover, by adding sonar sensors for appreciating Heteroduino, the team was named Heteromanous (the TadaGrant) and Heteroganum. The project both were alternatives of the previous one in the workshop.

Alternative and extension of ‘East 80-08` project by Heteromanus team “Manihood” as the alternative for the East 80-08 project was a fictional land formed and characterized by its rulers’ authorities. The land gradually shapes at the gods’ command with sign language, which is the only way of communication. This language is like a magic wand that grants authority to the ruler to control the land, and he will decide how to build his land. “Manihood” has been influenced by his rulers. In this case, indeterminate land objects would emerge under the influence of power and choices. Each person will be chosen to be the ruler in a specific span of time. This kind of authority is not permanent but influences the land. This work will always remain with its land, even in its most hidden layers.

The difference is that it focused more on capturing the changes made by the gestures of hands. Each day a specific part of this land would be accessible to build, and it would be solved like a puzzle. The final shape ultimately depends on the quantity of audiences’ participation. There was a technical challenge: reading the sign language and turning it into variables. The problem became solved, and gestures would have been developed to make more changes, and the appropriate materials and actuators will keep these alterations.

Alternative and extension of ‘Plum-Tree` project by Heteroganum team “The meaning of the world is not simply invented out of private subjectivity but is given to it by ‘Being’ itself. We are always already involved in a way of life, engaged with daily dealings with things in a known life-world that we can have some understanding of what things are all about. It is our being as participants in a collective world that first allows us a way of seeing reality and ourselves.” M. Heidegger, Being and Time In this sense, the human is the species who have in his mind a distinct “sense of being” which he refers to it as “Dasein”. 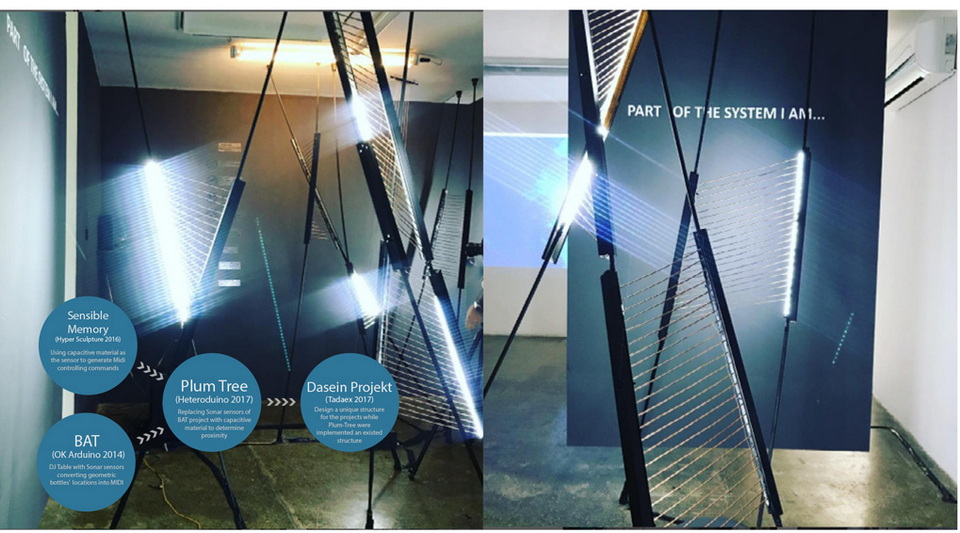 Heidegger gives great importance to “being” as a basis for understanding the seemingly outside world and ourselves. Dasein Projekt is a living organism with music as its beating heart which reflects “Being” through one’s moods. It can be an installation you interact with, an instrument you play or even a social experiment you participate in. Dasein Projekt as an interactive installation does not rely on traditional methods of participation since it senses your presence without any sensor modules. Implementing microcontrollers, a dynamic capacitive sensor has formed and charged by electromagnetic field intensity between the human body and conductive elements. This structure is responsive to the distance of conductive adjacence masses and used as sensory inputs (touch and proximity) to form a spatial MIDI-controller. There won’t be a need for a button or key to press nor a string to pluck; the music is unveiled by exploring the space around you as if the music is there all along waiting to be found and forged. There is no proper way of doing so: it is just your mood turning into melody.

“Beware of the touch, revealing what you are and not what you seem to be!” The Plum Tree was a living organism with music as its beating heart. It senses a man’s presence without any sensor modules, and it can take many forms. It can be an installment you interact with, an instrument people play, or even a social experiment you participate in. “Listen to the trees outside trading information; you know they’re just like us!” The Plum Album The plum tree, as an interactive installation, does not rely on traditional methods of participation. With the help of microcontrollers, sensory inputs (touch and proximity) are used to form a three-dimensional MIDI controller. There won’t be a need for a button or key to press nor a string to pluck: the music is unveiled by exploring the space around you as if the music is there all along, waiting to be found and forged. The participant is given one simple instruction: “Thou shall not touch the plum tree!” which encourages one not to follow it. There is no proper way of doing it: it is just your mood turning into melody.